What is Sembrando Talentos Uruguay?

Sembrando Talentos Uruguay (STU) is a program focused on promoting musical education and human values to children and young Uruguayans.


Considering the fact that in the last decades Uruguay has relegated the importance of academic musical education to a secondary place, which makes it impossible for the young uruguayans, especially those whose socio-economical situation is more at stake, to access any education of this type, that is why violinist Nicolás Giordano Pisano created and developped this program.

Similar initiatives worked as sources of inspiration for this project. It is the case for the outreach cultural programs of the YOA (Youth Orchestra of the Americas), which has a very strong impact in the United States and Latin America.

The educational program Sembrando Talentos Uruguay uses music as a tool in order to inculcate in the children and young people who participate to the program, not only musical knowledge, but also aesthetic and social knowledge. It is run by young musicians internationally prominent, coming from Europe and America, who participate in the project in an interactive and honorary way.

Within the frame of STU, are carried out musical camps, music festivals, masterclases, didactic concerts and workshops during the entire year. Those activities allow the development of the partakers as future professionals of music, and result in a complete motivating and creative experience. The interaction between teachers and students, the exchange of life experiences and the permanent contact between elders and youngsters promote learning processes in all nivels of the human being.

"Sembrar" (to seed) is an act of faith which requires permanent work. Our organization is aware of that, and that is the reason why we are always looking for news ways to get children and young uruguayans closer to academic music, based on participation and integration, using a flexible model which aims for excelence and social insertion, especially for those who would not have any similar opportunity otherwise. 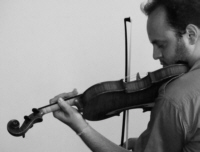 He is artistic director of the uruguayan organization Sembrando Talentos Uruguay, which has organized international music festivals, music camps and masterclasses of music for uruguayan children and youngsters during the past six years.

Nicolás has received the prize "Hildegard Behrens Young Artists" as well as the prize "Morosoli a la Cultura Uruguaya" for his artistic and social contributions.

He has been named "Artist for Peace" by the president of UNESCO. 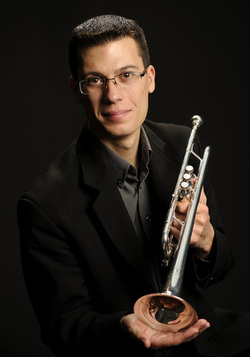 Virtuoso trumpeter Carlos Manuel Zabala performs as a soloist and chamber musician with the most diverse ensembles. He has soloed with chamber groups, orchestras, and bands; along with with piano, and organ. Among the Music Festivals where he teaches regularly are Alfredo de Saint Malo International Music Festival (Panamá), Sembrando Talentos Uruguay, others. He leads trumpet and brass masterclasses around the globe.

From tango, bossa-nova, and traditional Latin American music, to the standard classical repertoire, Carlos Manuel Zabala is a versatile trumpet player, acclaimed by several as "a musician by heart who got to play the trumpet".

As a tireless music lover and performer, he is constantly working on discovering, arranging, and transcribing music from the most diverse styles and genres for both, trumpet, and flugelhorn.

As a native of Uruguay, in 2011 and upon graduate from the Escuela Universitaria de Música (University School of Music), Carlos Manuel Zabala became the first trumpet player in the history of his country to archive a university-level degree. 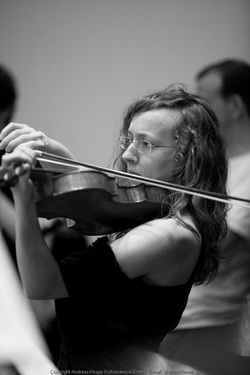 Violist and composer Claire Poillion was born in Mouvaux (France). She graduated with a first prize of harmony from the National Superior Conservatory of Music and Dance of Paris (CNSMDP), as well as with a diploma of musical studies (DEM) of interpretation (viola) with the highest distinctions in the National Regional Conservatory of Paris.

After he graduation in Paris, Claire met the Maestro Gordan Nikolic, who invited her to be part of his class. From this invitation Claire studied in Codarts, University for the Arts (Rotterdam, The Netherlands), where she concluded her Bachelor within the guidance of Gordan Nikolic, Vladimir Mendelssohn and Anne Hüser.
In The Netherlands, Claire played as second leader in the orchestra Sinfonia Rotterdam from 2007 till 2013, and was as well invited to play in the most important orchestras of the country, like The Netherlands Philharmonic Orchestra, the Netherlands Chamber Orchestra, the Brabants Orchestra...

Claire is member of the orchestra BandArt (Spain), a conductorfree orchestra lead by Gordan Nikolic.

Most interested in other styles of music, Claire is member of the gipsy duet Los Calabacines with Nicolas Ortiz (violin), in which they play their own arrangements of gipsy standards, as well as the celtic duet Gobslotch, with François-Xavier Luchart (hammered dulcimer).
In 2003, Claire participated in the creation of the baroque ensemble Les Parodies Organisées (France), where she played until 2008, performing many concerts, as well as the creation of two festivals, Y'a de l'orgue dans l'air ! (2007) and La Symphonie des Muses (2008).
In the baroque music field, she worked also with Philippe Couvert, Roy Goodman, Philip Pickett, Patrick Ayrton and Elizabeth Blumenstock, between others.

She received the SACEM prize (french Society of Authors, Composers and Editors of Music) twice, in 2008 and 2009.

2013 marks a radical change in Claire's life: she takes the decision to leave her musical life in Europe in order to establish herself in Uruguay, especially in order to dedicate more time and energy in the organization Sembrando Talentos Uruguay. Since April she is second violin tutti in the Philharmonic Orchestra of Montevideo and viola tutti in the Symphonic Orchestre of Sodre.

Claire plays a viola Castagneri from 1756, lent by Gordan Nikolic.